How does the task kanban work?

The text field below each status is freely editable and you can create a "own name" instead of the "default task status" if you want (for example, the status "In review" can mean "Invoicing" and you want to close the task from the system only when the maintenance task has gone to billing)

Tasks with a due date within the next 90 days will appear on the Kanban in "open" status.

When a task is moved from open to running in one way or another, it is possible to assign the actual task executor (user) to the task.

When the status of the task is open, Kanban displays:
*task name
*responsible role
*possible executor (user)
*task due date
*how long until the due date (days)
*does the assignment include an assignment form?
*does the task relate to a work order (below) 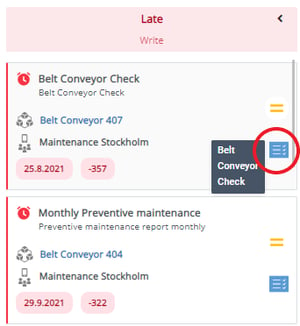 When you move a task from open or overdue status to "Running" status, you can set the task to be performed by a user belonging to the individual task's responsibility role. This way, the task is visible to everyone who belongs to the responsible role, but everyone knows that the work is actually being done by a certain maintenance man.

Tasks that have been completed in the last 30 days will be displayed under Completed Tasks.

If the status of the device is set to "Faulty" or "Not in use", the tasks are automatically put on hold. When the spot's status is changed back to "Active", the task will go back to either "Open" or "Late".